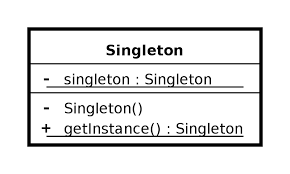 I'm at a moment in my developer journey where knowing design patterns is important. Understanding exisiting code, making sure to write new clean code, being able to communicate with more senior developers...

As a self-taught developer, I never really went deep into those subjects. I heard some of the patterns names, used it a couple of times but that's it. So, now that I decided to learn them properly, I'll share my journey with blog posts like these. Maybe you'll find them of some use, or you might even correct me if there are some mistakes ;)

Note: Code examples will be in Java because that's what I'm using in my work, and what my learning material uses.

A Singleton Pattern ensures a class has only one instance, and provides a gloabl point of access to it.

It's an important concept because some objects (like objects that handle logging or thread pools or caches for example) only need to be instantiated once. If you have more than one instance, it could create issues (logging the same things several times) and consume a lot of resources. On top of that, we have to make sure that our object is created only when we need it. There would be no point in creating an instance if the object is not used right away. This is one of the differences with a simple global variable.

Question is, how do we do that?

Let's look at a code example:

Here is a Logging class. For my purposes, I only want one instance of this class running at all time.

You can note that the constructor private Logging(){} is indeed private. This class can't be instantiated from outside the class.

The getInstance method is static, meaning it's a class function and can get called anywhere with Logging.getInstance(). This is the method other classes will use to retrieve the Logging instance.

And that's how things would work. You would call the getInstance method to get the Logging instance to call other useful Logging methods. The new keyword would throw an error because the constructor is private! Awesome.

But what about multithreading? What if two differents threads access the Logging.getInstance() method at the same time? If both threads do not find an existing instance, they will each create a new instance. Therefore, you end up with two different instances of the Logging object... So much for being a Singleton huh...

You have a few options.

This will make sure that every thread will wait for its turn before entering the method. So, if two threads want to access getInstance at the same time, we won't create two different instances.

One problem with this approach: it's fairly expensive to synchronize the getInstance() method. Because every thread has to wait its turn, it creates a bottleneck when threads (or even a single thread) have to access the method. Plus, you really only need to synchronize the getInstance method at the creation of the Singleton, not once the instance has already been created.

Create the instance when the class is loaded

With this approach, this is the JVM that creates the instance when the class is loaded, and before any thread can access the method.

Double-checked locking fixes the problem mentionned earlier by the synchronized keyword. It allows us to synchronize the method only if no instance has been created.

First, notice the volatile keyword for our Logging variable. This keyword makes sure that multiple thread handle the instance variable correctly when it's being initialized in the Logging instance.

Note: This method will not work for Java 1.4 or earlier.

Despite its apparent simplicity, the Singleton's implementation can be tricky and we must be aware of the details. Things like multithreaded applications, the JVM version, the resource constraints or the number of class loaders can impact the way you implement this pattern.